Judy West at Creative Doodling, had us doing stackers this week. I LOVE stackers and don't know why I stopped doing them. This is the one I did for her challenge: 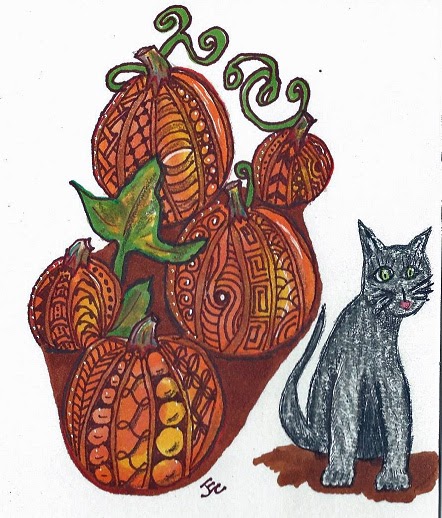 I don't know where the cat came from. He was just wandering around in my pen and decided he had to get in on the fun. I'm obviously not much of a "realistic" artist HAHA!

I did the pumpkins first using Copics and colored pencils. They really looked pretty before I added all those tangles and all that coloring work disappeared.

After I finished, I had to go back and look at the one I did a year ago.
Tangles have improved a bit, cat, well, not so much! 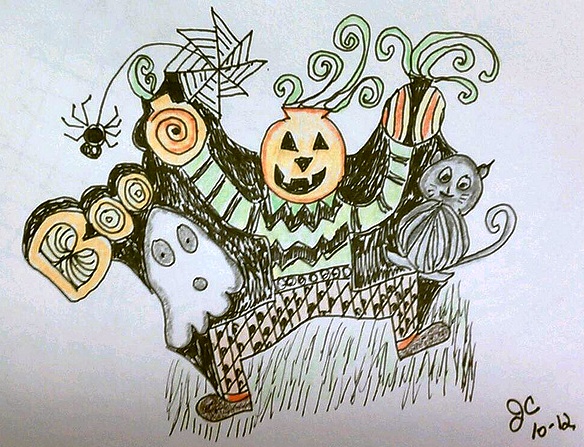 Also, The Diva Dared us to use Tipple. I LOVE tipple now that I have used it a few times. I didn't like it at first, but things do change. I was working on a bookmarker for my grandson and just added some to the background:

Tangling Lefty, Adding Grounding, and a Bookmarker for Fall

A Facebook group I belong to was talking about doing an Autumn Bookmarker. Nothing came of it, but the idea was in my head anyway:


I had a small silk leaf that I used to trace on one and spray over on the other. I used Betweed, 'nZeppel, and something I can't remember the name of. Sigh.


The Yahoo ZIA Group had us do a tile adding some grounding. I don't often think of doing this, so I thought it would be a good idea to try: 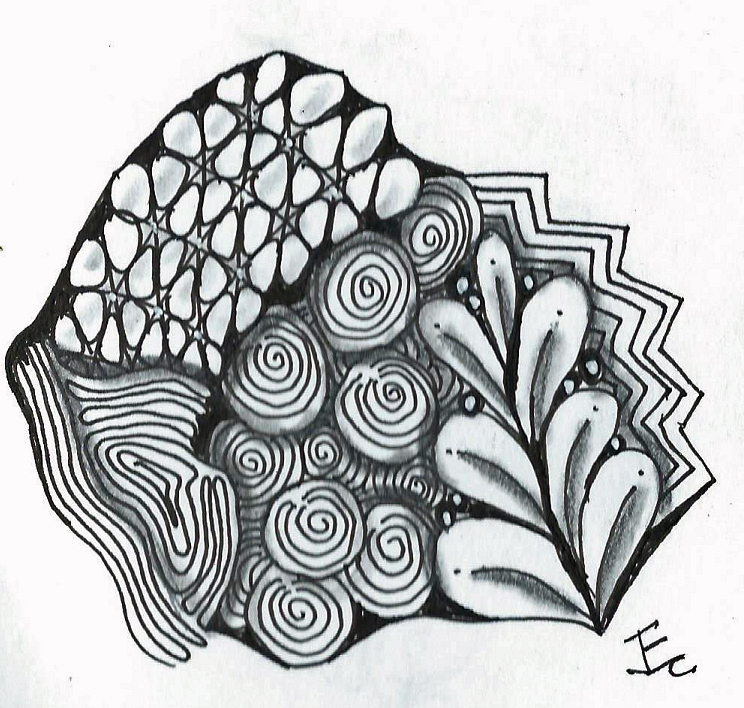 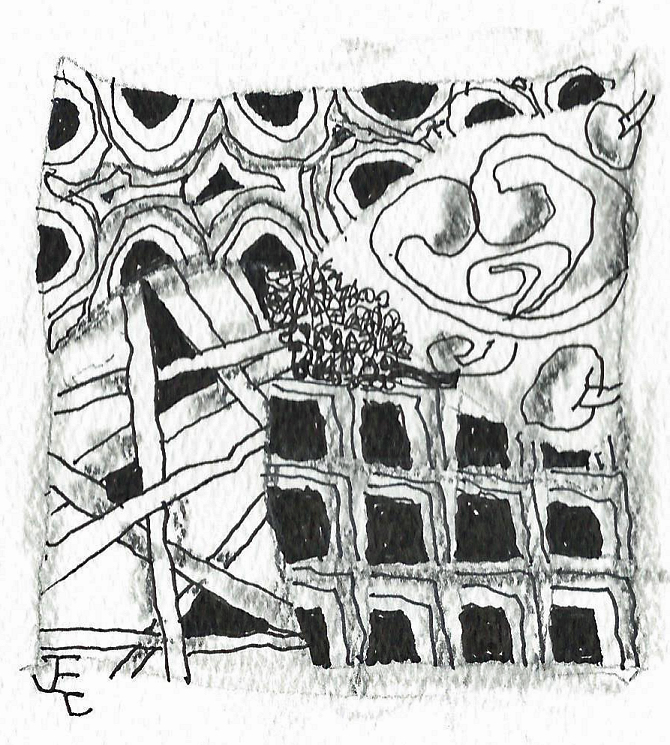 Well, trying to do a Zentangle lefthanded was quite the challenge, from the Diva. I noted a few things while trying to draw with my non-dominant hand. First, I drew more lightly, second, I drew more slowly. Then, I noticed that I was very tense and un-zentangle like and had to force my shoulders down. Then, I started to wonder if I should try to turn my hand upside down like most lefties do. That didn't work at all. I'm almost embarrassed to post this one:

I though it best to use easy tangles for this one. I used Mooka, Crescent Moon, Flukes, and Pokeroot. Can anyone guess why there is a Bronx Cheer in there HAHA!

Posted by jeanchaneyaz at 4:25 PM 8 comments:

This week's Dare from Erin at The Bright Owl just was asking for a monotangle. I flipped through different tangle patterns and decided on Stricles with NO shading: 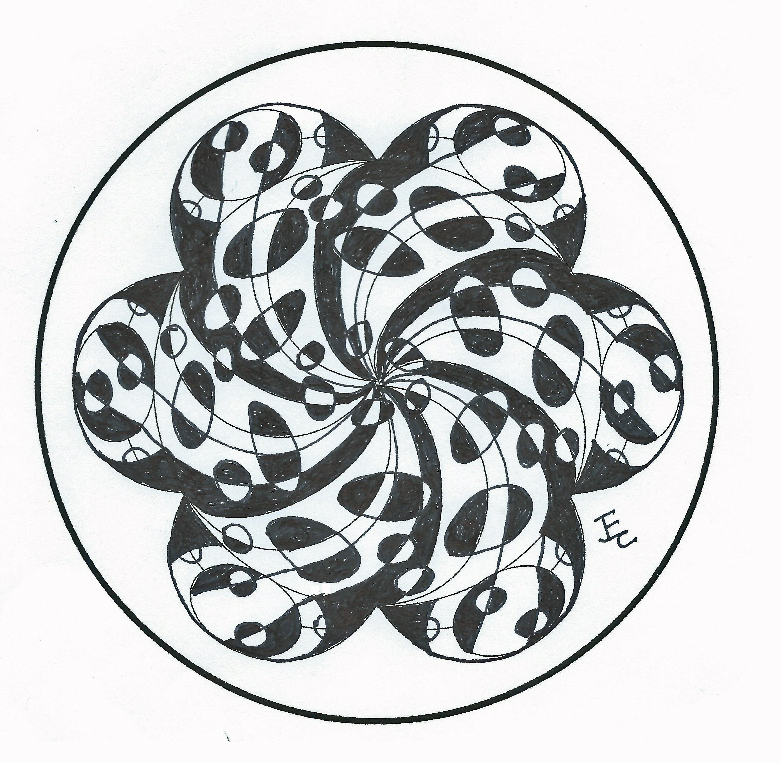 Thanks for stopping by. I love reading all your comments!

Okay, I couldn't stand it and am editing to add the same one WITH shading. Which one? 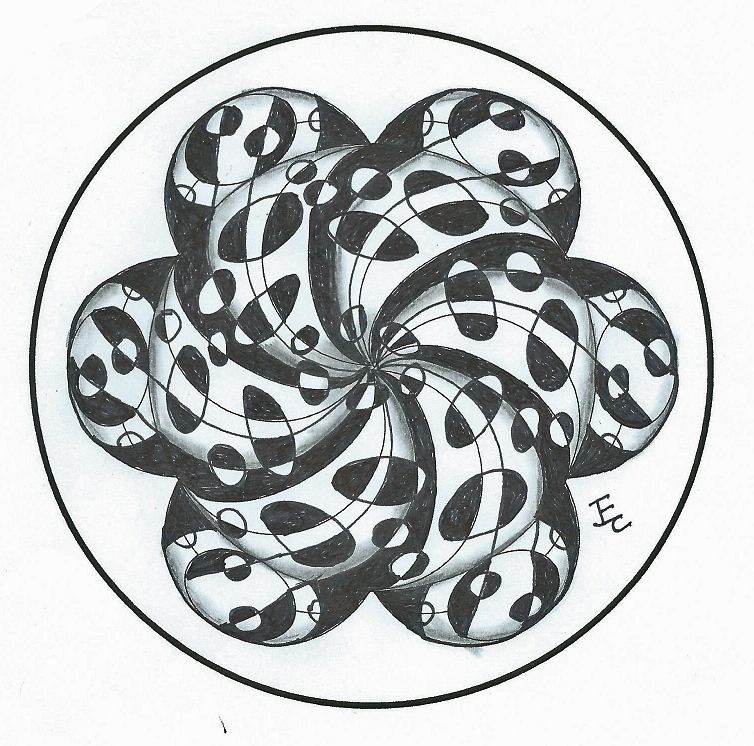 Only two today. First I did the Celtic Challenge #32 from Judy West. We were to make up our own tangle pattern and then put it into  Celtic designed step out boxes and decorate them as well. I have made up a tangle called "chopped". If it is already out there with a different name, I do apologize and let me know so I can give proper credit.

Then Roy, at Mindful Creations, had us do Margaret Bremner's Cockles n Mussels. I really enjoy doing his monotangle exercises. They really get you thinking about ways to spice it up. 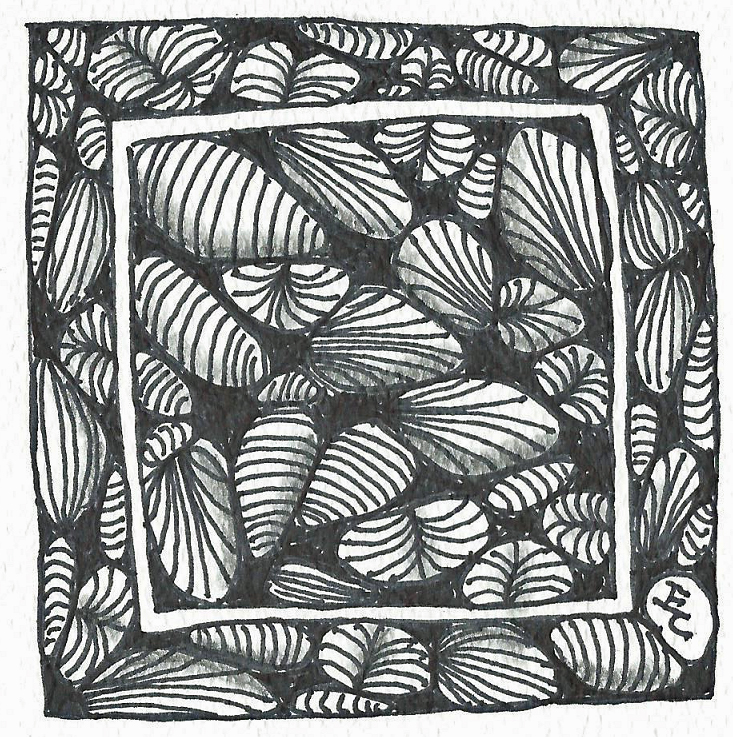 Just a bit lopsided but you can be sure I didn't use a ruler LOL!

Posted by jeanchaneyaz at 8:35 AM 9 comments:

Sandra Strait is so generous to the whole Zentangle community. She does reviews of just about any tool, paper, or notebooks you might want to use for your Zentangle Inspired Art. She spends the time looking up all kinds of contests and free tutorials that might interest you. She also has contributed many tangles and done wonderful tutorials. Today, I wanted to try out her tutorial for semi-transparency that is on Tangle patterns, and combine it with the weekly challenge from the Diva to use Dex as a monotangle. I really had a lot of fun making this "bubble" and, do check out Sandra's Blog. 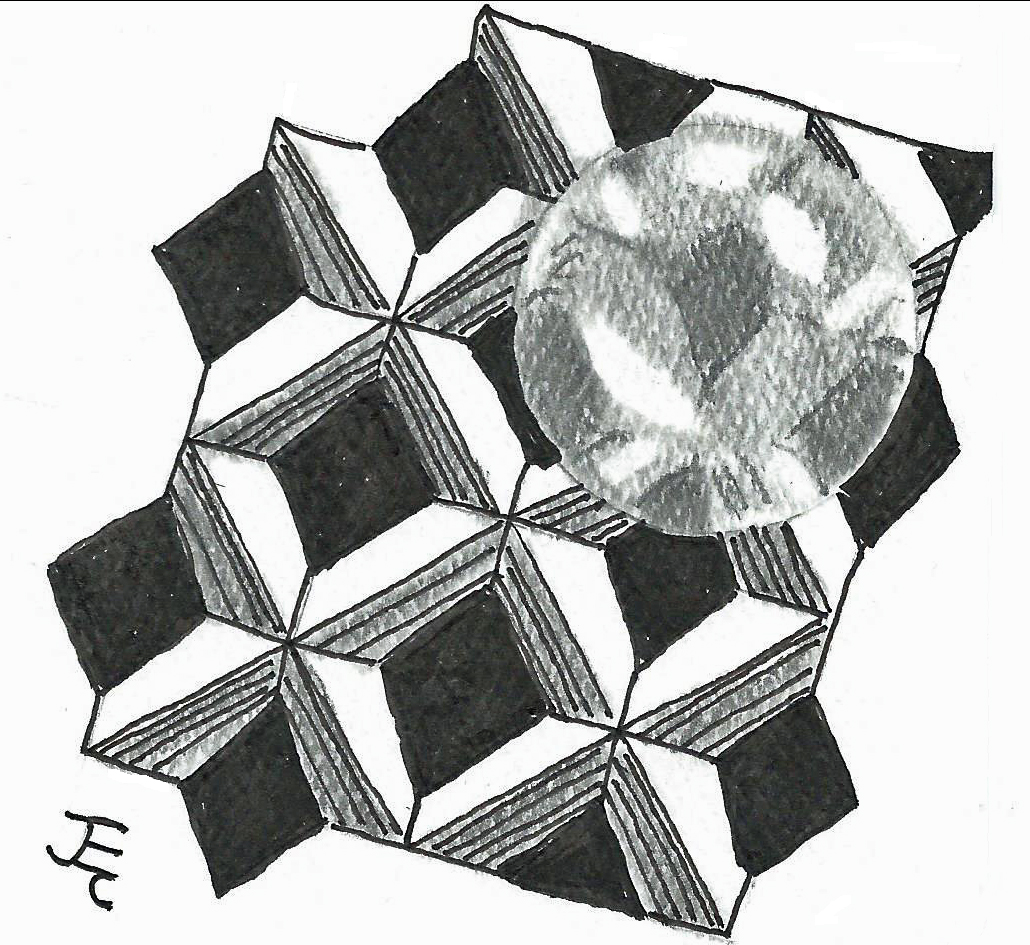 Classes for Zentangle® and Dare #69

I have a few classes lined up to teach the basics of Zentangle®. The first is at Hobby Lobby on West Bell Road in Peoria on August 30th. The other venue will be at Arizona Art Supply in Sun City, where I will be teaching a class on September 18th. Click on the tab above for Classes and Workshops for more information.

I loved the template that Erin used on The Bright Owl this week. Very different. I really took my time, for a change after watching this YouTube video Each Line, One Breath by John Franzen. Amazing patience. I now have a Facebook page just for Tangle Street. I was afraid my family and friends really didn't want to think I have nothing in my life but Zentangle. Hummmm.....
Anyway, should you like to see it, I have a link on the right side of my posts.

A few fun things this week. Henna Drum (Jane MacKugler) was the tangle to use for  the Diva Challenge. I wanted to play with my new Zenstone, available from Zentangle: 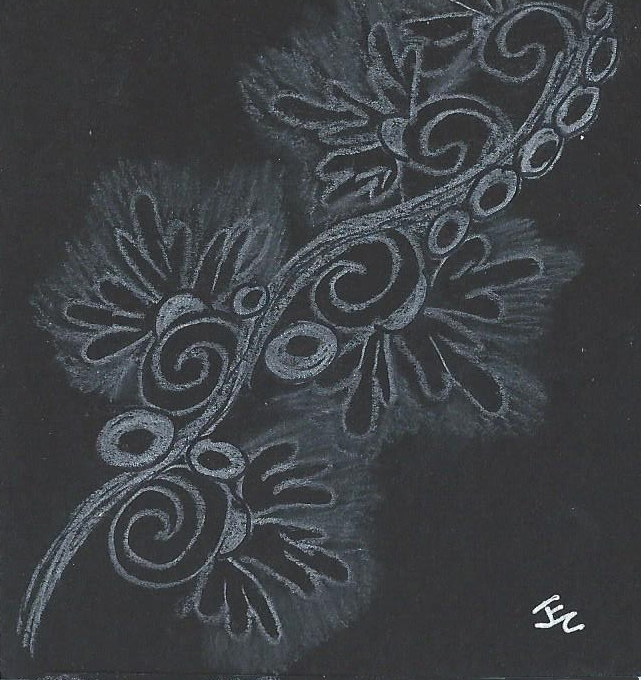 The first one is done completely with the Zenstone, except for my signature (didn't want you to miss that HAHA)


For the second one, I used a white gel pen and did the aura with the Zenstone. 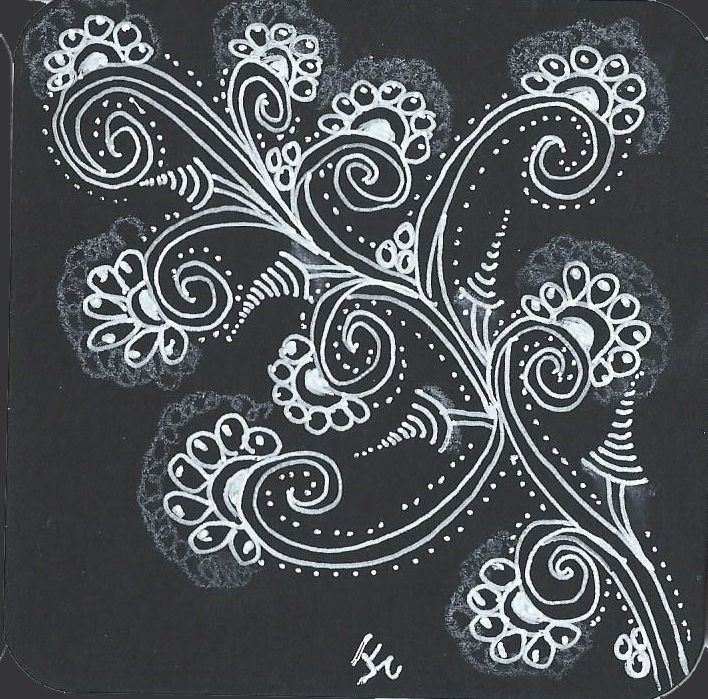 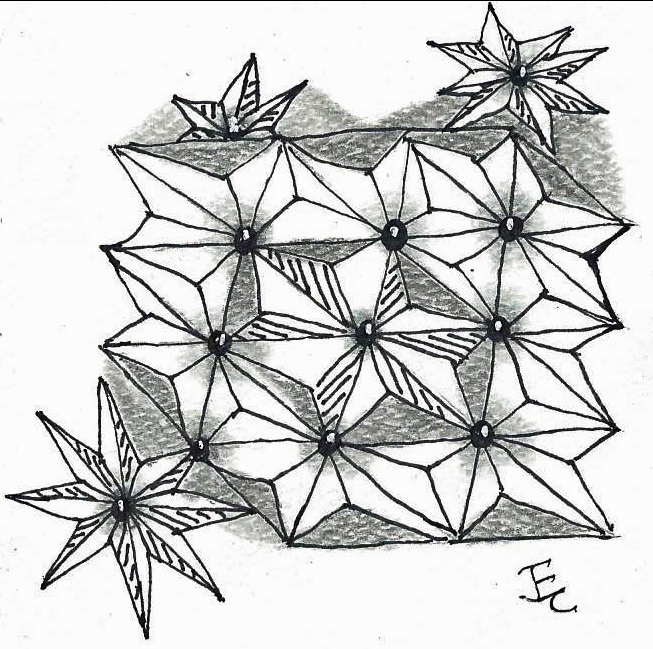 For the contest for the Beez Ink Studio,
We were to use Hemp. Boy,what a battle I had with this one. If I would slow down a bit and remember that I am doing Zentangle, well, I just should.

Just for fun and a smile: And, finally, Roy at Mindful Creations' adventure had us using Cracked by Lori Howe: 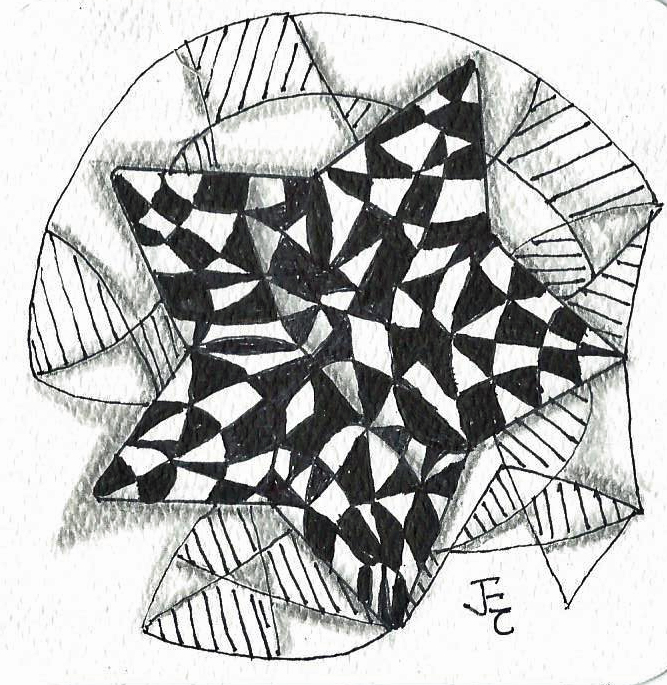 Posted by jeanchaneyaz at 1:05 PM 6 comments:

(Don't try to follow the above gibberish, it takes you to whomever is new to bloglovin, not to mine. I don't really understand how it works, but according to their directions, I had to post this first on my blog to get listed. I still don't see my blog listed under the keyword, Zentangle. If you know how I do that, please advise.)

I am now a member of Bloglovin. It's like Google Reader used to be, a place to keep all your favorite blogs for easy reading. There are apps for your iPhone and iPad also. Just look up tanglestreet.blogspot.com
Thanks
Jean
Posted by jeanchaneyaz at 7:16 AM No comments: 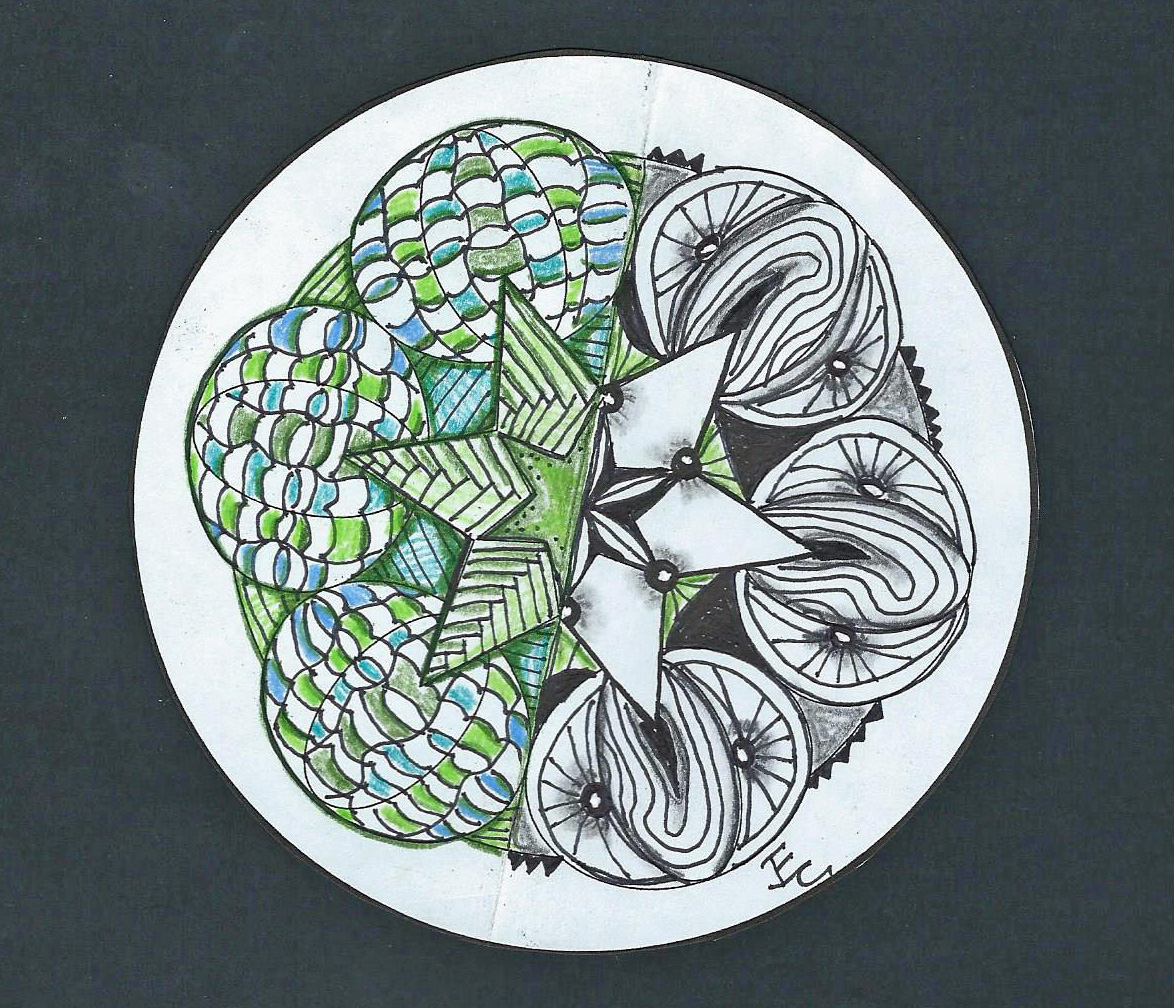 This week's Dare from The Bright Owl was to do something like a Jekyll and Hyde adaptation of her template. I folded the paper in half and just made two different sets of tangles.


Then, after coloring one in, using blues and greens, I slipped just a tiny bit into the black and white side to acknowledge that they are related 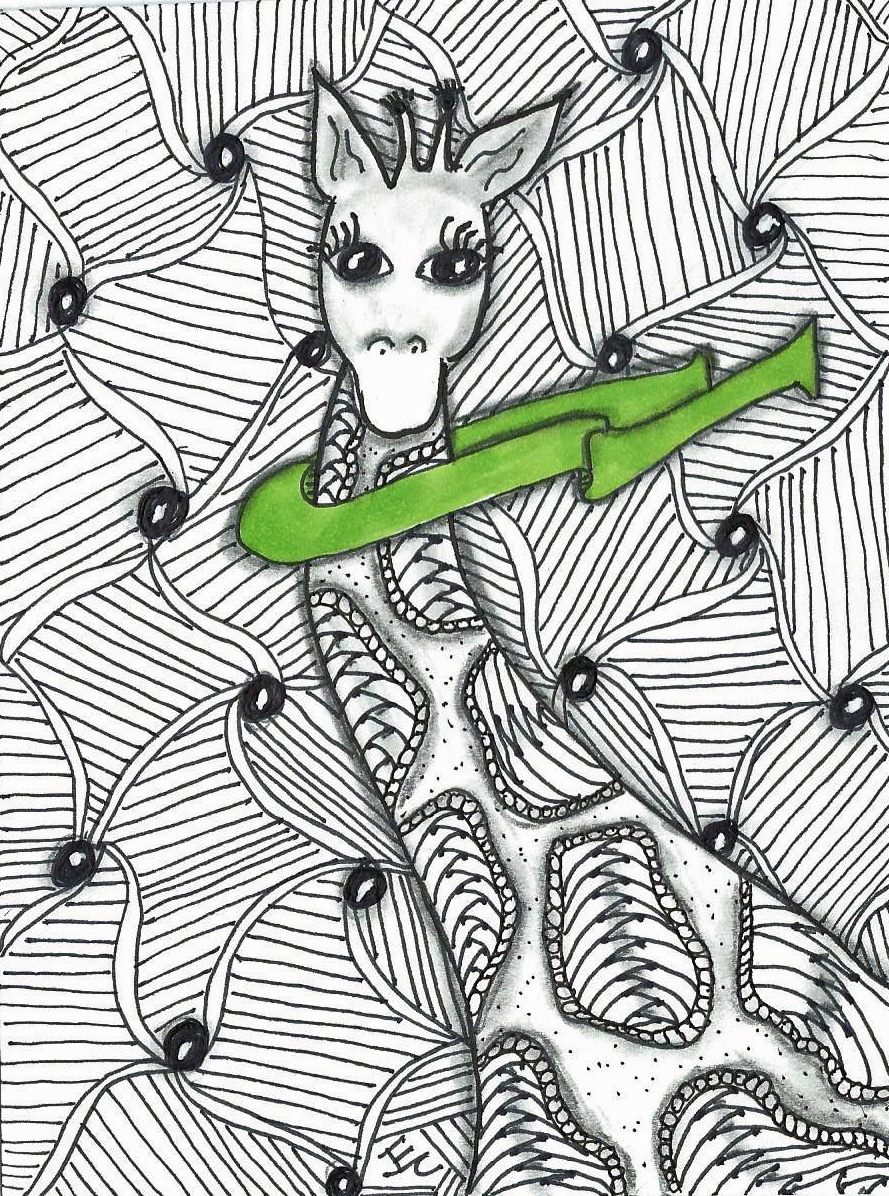 My favorite ZIA, Zentangle Inspired Art, this week was from my ZIA Yahoo group. We were to do a ZIA in black and white and then use just one color to it.

I happen to love Giraffes.

If you love a particular animal or two, look online for that animal and "totem" and you will find out that you like a certain animal for a reason.

(Humm, I just noticed that this seems to be a green week. I think I was purposely pushing myself out of the purple range for once!)

A few other Zentangles and ZIAs: 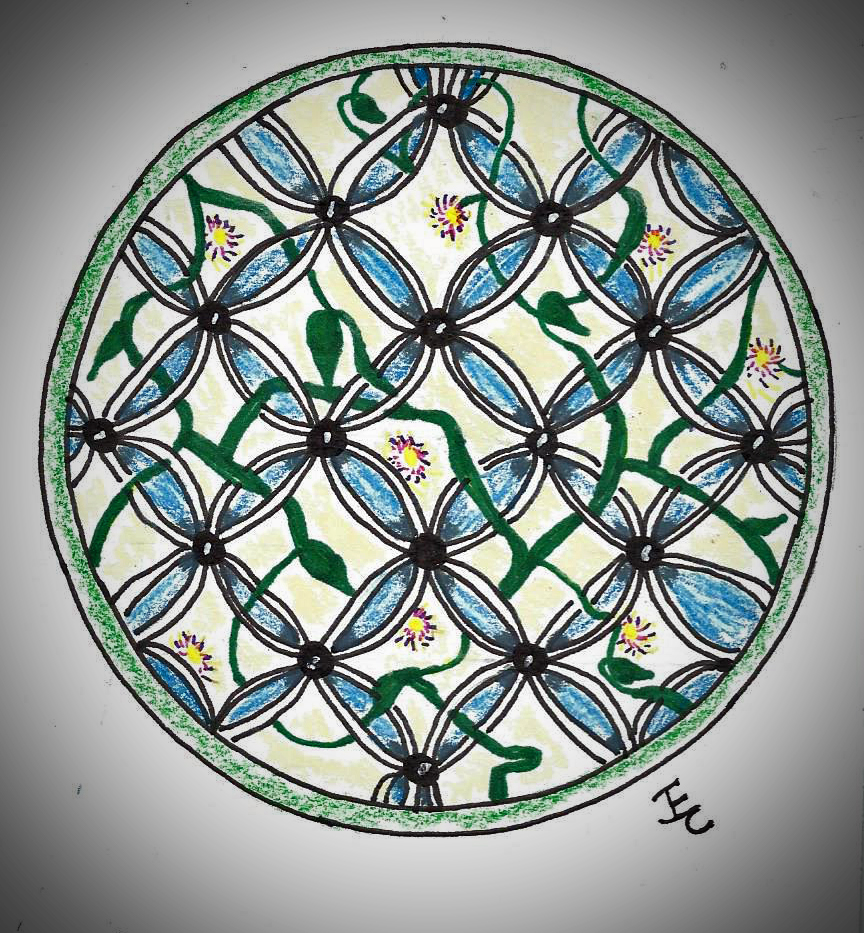 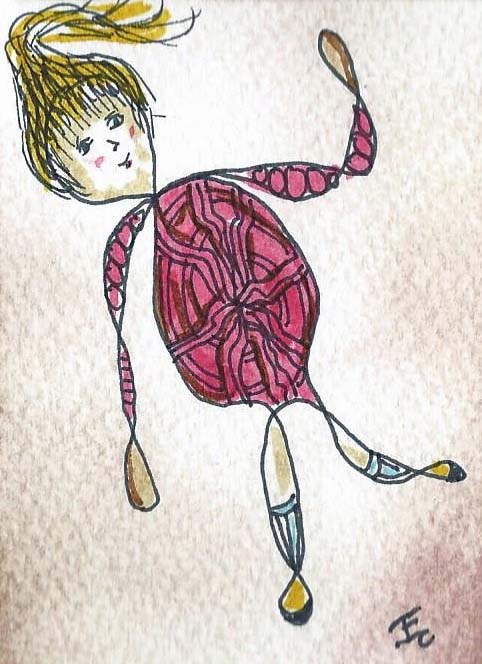 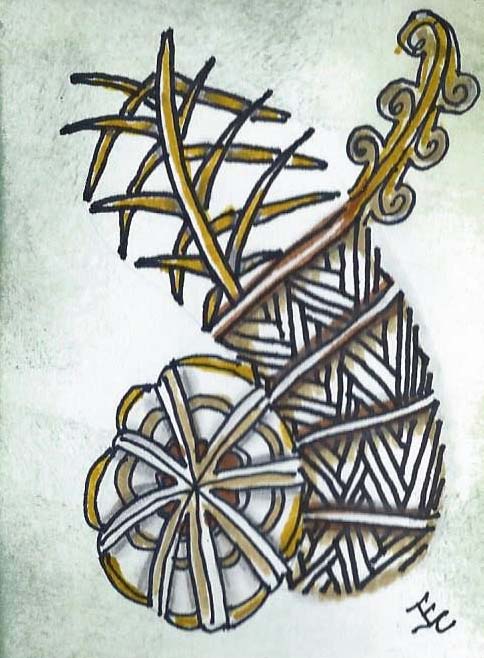 Right:
Idea from a YouTube Video of a CZT Marketing Retreat of
"Tangle Folk" by Billie Lauder. These are tooo much fun! Take a look! 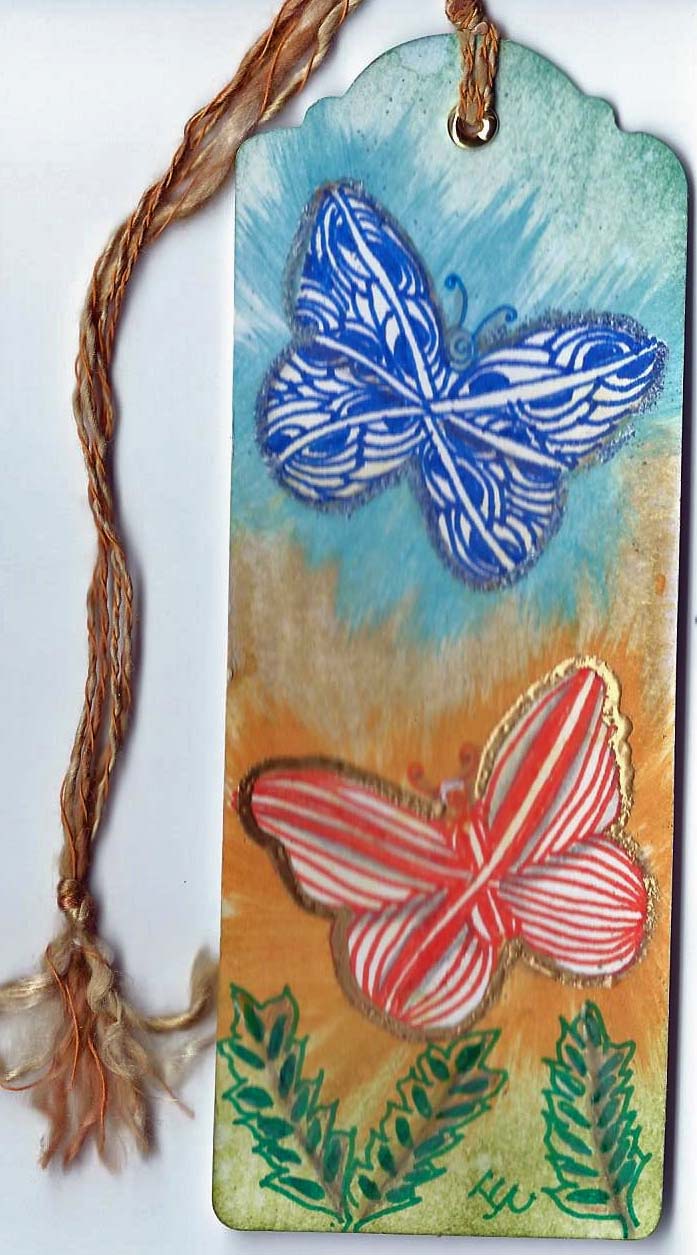 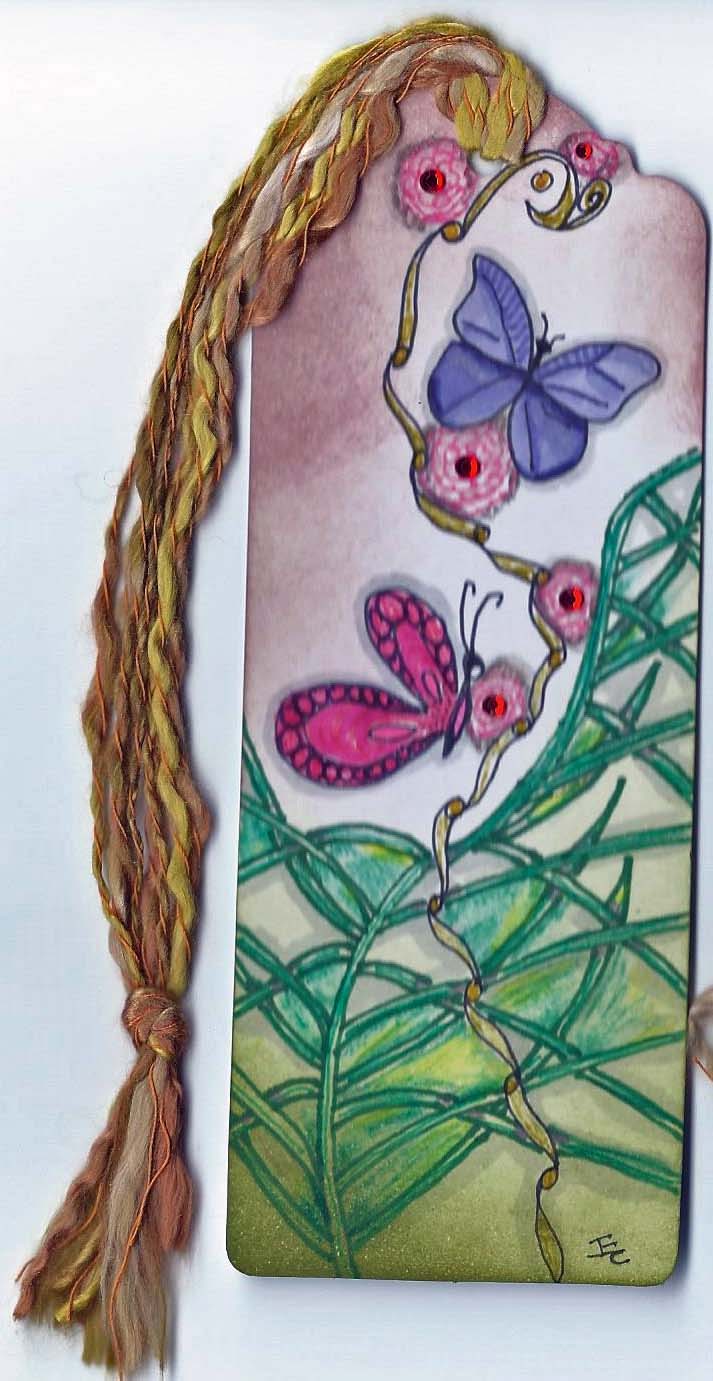 Bookmarkers for a Swap. The ties are made from my own handspun Bombex Silk.